By Parkgate August 22, 2019 Uncategorized
No Comments

August 17th was National Black Cat Appreciation Day! And what’s not to appreciate? They’re sweet, gorgeous, and don’t get hair on your dark carpets. Let’s take a look at some facts, misconceptions, and adorable pictures of black cats.

IN SOME CULTURES, BLACK CATS ARE SEEN AS GOOD LUCK! 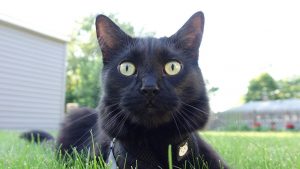 They may have a less-than-stellar reputation in some areas of the world, but there are plenty of places where black cats aren’t bad luck at all. If you’re a single woman in Japan, owning a black cat is said to increase your number of suitors; if you’re in Germany and one crosses your path from right to left, good things are on the horizon.

Not only were cats welcome aboard British vessels to hunt mice, but sailors generally thought a black cat in particular would bring good luck and ensure a safe return home. A few of these kitties have been enshrined in maritime history, like Tiddles, who traveled more than 30,000 miles during his time with the Royal Navy. (His favorite pastime was playing with the capstan’s bell-rope.)

3. THERE IS NO ONE BLACK CAT BREED.

The Cat Fanciers’ Association (CFA) recognizes 22 different breeds that can have solid black coats—including the Norwegian Forest Cat, Japanese Bobtail, and Scottish Fold—but the Bombay breed is what most people picture: a copper-eyed, all-black shorthair. The resemblance to a “black panther” (more on those animals in a bit) is no coincidence. In the 1950s, a woman named Nikki Horner was so enamored with how panthers looked that she bred what we now refer to as the Bombay.

4. BLACK CATS ARE AS EASILY ADOPTED AS CATS OF OTHER COLORS.

It’s common to think that black cats in shelters are the last in line to find their forever homes, but a recent survey from the ASPCA suggests otherwise. Although euthanasia numbers for black cats were some of the highest, their total number of adoptions was the highest of any hue as well. The vet who conducted the study argues that there may just simply be more black cats than other colors.

A black cat’s color all boils down to a genetic quirk. There are three variants of the black fur gene (solid black, brown, and cinnamon), and the hue works in conjunction with the pattern. If a cat has a solid black hue, but also the dominant tabby stripe gene, heavy exposure to the sun can make the eumelanin pigment in its fur break down to reveal its once-invisible stripes (another potential cause: nutritional deficiency). What was once a black cat is now a rusty brown cat.

6. THE GENE THAT CAUSES BLACK FUR MIGHT MAKE THESE FELINES RESISTANT TO DISEASE.

Even though their coloring is what gives them a bad reputation, these felines may be getting the last laugh after all. The mutation that causes a cat’s fur to be black is in the same genetic family as genes known to give humans resistance to diseases like HIV. Some scientists think the color of these cats may have less to do with camouflage and more to do with disease resistance. They’re hoping that as more cat genomes are mapped, we may get a step closer to curing HIV.

So, now that you know more about black cats, you may want to adopt! Come see us for more information on adopting, kitty care, and more at Parkgate Animal Hospital, in the Seymour-Deep Cove area! You can also give us a call at 604-929-1863.